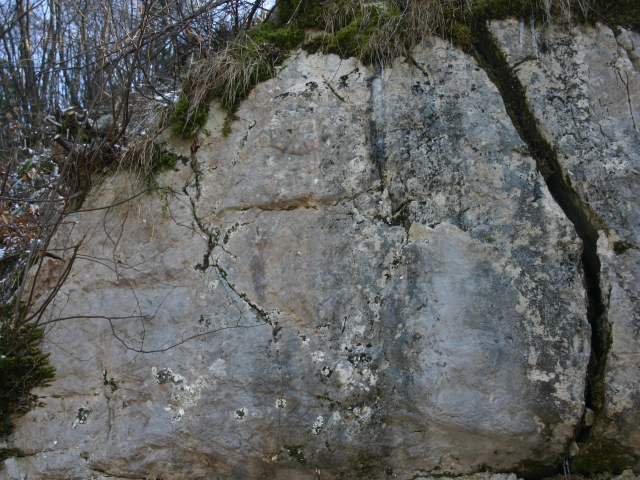 In the beginning of the Baška grapa valley there is a beautiful road that rises in numerous serpentines from 519 to 804 metres of altitude. In the first lower serpentine, there is the “pri Ruscu” home and this is also the first house number in Podbrdo. By the house, which lies in idyllic seclusion, there is a constantly frothing waterfall to the hollow of the gorge. A “Turkish cross” is cut in a rocky wall and it is supposed to have been there for nearly five hundred years! The inhabitants of Petrovo brdo, Podbrdo and the surrounding villages know about this ancient sign and the present owners of the Rusc home and the land guard and protect this sign as one of the most precious traditions. And so is right! It happened in the time of Turkish attacks on the Slovenian territory in the second half of the 15th century or towards the end of it. According to the oral tradition, it all happened like this:

At one time the Turks came from the Baška grapa valley across Petrovo brdo to Češnjica, where they killed a few people, burnt down some houses, partially robbed the village and took a 6-year old boy named Jožek with them. Jožek’s father, whose home was burnt and wife killed, saved himself and his one-year old daughter. He moved away from the place of a horrible crime and great sorrow to seclusion on the right bank of the Sora river even further from Zali log. As these people came from the Selška dolina valley, they got the name “dalesmen” (dolinarji). The inhabitants of Podbrdo and Petrovo brdo, Sorica and the places in the upper part of the Selška dolina valley chose after the first Turkish invasion a suitable place above Podbrdo to arrange it as entrenchments. This place was above an upright stony wall in today’s Rusč world. There was a path below this wall and the place was thus suitable for this purpose. People were determined to stop the Turks at this place. Twenty years after the Turkish invasion to Češnjica the Turks came again to the Baška grapa valley and they were preparing to cross Petrovo brdo. There was a battle below this wall and a few Turks were killed, a few injured, and the rest withdrew. Among the injured Turks there was also a janissary Juzuf (Jožef!). According to his tattooed mark on his hand, he was recognized as Jožek who was kidnapped twenty years ago. He was also of the right age. The former janissary, now Dolinarjev Jože, cut a cross in the wall below which he had been injured and captured to remember his rescue and return from the Mohammedan world to the Christian one. This is the origin and the meaning of this “Turkish cross”, which has been preserved till today. Dolinarjev Jože soon got completely accustomed to the home environment and learned about all the details of his kidnapping. He got married and returned to Češnjica where he renovated the deserted and burnt down home. He also retained the name “by the Turk”, which has been preserved till today. How can all these events be historically proven and how can they be placed, at least approximately, into an exact period of time? France Svetličič (1814-1881), a teacher and a poet, wrote an epic poem about this event titled “Turkish Cross”. The second source that explains the event quite well is a folk play “Turkish Cross” written by dr. Janez Ev. Krek. The third source is the notes of Simon Rutar, a historian who wrote “The History of the Tolmin Region”. According to these sources, the young Jožek was kidnapped in September 1471 and the second Turkish attack happened in 1491.